At Brilliant Labs, we often have the opportunity to work with inspiring students on brilliant projects. Last month, I challenged a few groups of students to create an interactive learning activity using one of our favourite devices, the MakeyMakey by Joylabz. We have been very pleased with the projects that these students are creating, which include a “The Staircase Factor Factory, World Power: The interactive exploration, and of course for the holidays, a tree that launches student favourite carols, simply by touching an ornament.

We are pleased to showcase the first of the completed projects below. Fortunately, one of the students volunteered to document her progress throughout the project and her comments follow below.

The main goal of this project is to give young kids a fun, more interactive way of learning colours. I find that I normally tend to remember things better when I get to interact or be involved with the lesson than just being told how to do everything or taking down notes, because, let’s be honest, it’s more fun to get involved! Kids are probably going to remember their colours better if they have a fun, interactive way of learning than if the teacher tells them that blue & red make purple, blue & yellow make green, and all the other colour combinations, because that just isn’t fun!

The way our project works is, you have three objects that conduct electricity in front of you. Either they say a primary colour on each of them, or they are each one of the primary colours. When you touch each of the colours, they show up on the computer screen. When you touch multiple colours, the colour combination of those colours show up on the screen! Now you’re probably wondering how it all happens. Well, with this awesome device called the MakeyMakey, you can turn anything that conducts electricity into a computer key by using alligator clips! Later I’ll talk more about the coding. 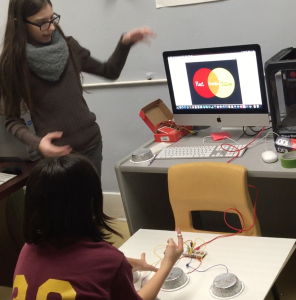 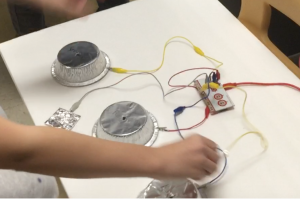 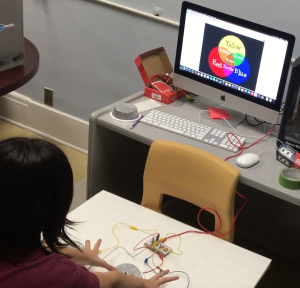 This is a great project. Not only does it include a student’s love for coding, but she was able to thing beyond the scope of the screen, and design an intriguing, physical interface via the makeymakey. While there may be some further debate on colour mixing theory, the goal to teach young learners the principles of colour mixing, was exceeded, not to mention the bilingual interface! Impressive.

1. Plug the MakeyMakey into your computer’s USB port.

3. Get the alligator clips that are attached to the up, left, and right arrows, and attach them to the three conductive materials that represent the primary colours. Make sure that the left arrow is yellow, up is red, and right is blue.

4. Take the alligator clip attached to the down arrow and just attach it to any conductive material. This will be used to toggle between English and French mode.

5. Finally, take the alligator clip that’s connected to “earth” and attach it to something conductive, preferably something that easily attaches to you, like a bracelet made of aluminum foil. It will still work if it’s not wearable, but it might be a little bit more annoying to use.

Now your basic setup is complete!

To get this working go to my Scratch project titled “Bilingual Colour Learning Tool” and click the Full Screen button, which is on the opposite side from the Play and Stop buttons (the green flag and the stop sign) to get a better view of the project. Click Play and you’re ready to rock and roll! To use the game, just touch the different colours to mix them and touch the English/French button to change the language (keep in mind that you need to be touching the “earth” at the same time for it to work

The second script is slightly longer than the first but it is much more important to how the project functions, and this time it’s attached to “Sprite1”. First it starts off with a “when (key name here) key is pressed” with down key selected, and what it does is, if the “mode” variable (a custom variable that I made) equals 1, it will change it to French mode or “mode” 2, but if it doesn’t, it will set the “mode” variable to 1 or English mode.

The third and final script, which is also connected to “Sprite1”, is the most important and the longest script. First it detects when the game has started, like the first script does. Then if the “mode” variable equals 1, first it will check if up, left, and right arrow keys are pressed. If they are, it will change “Sprite1” to the “Brown” costume. If up, left, and right aren’t being pressed, it will see if up and left are being pressed, and if so it will switch to “Orange”, but if not it will continue down the script until it finds the key combination that it’s looking for. If none of the keys are being pressed it will just show you some instructions on the screen. If the “mode” variable equals 2, it will do almost the exact same thing, but it will switch to the French versions of all the costumes that I made.

That pretty much covers all the basics of my project. If you have any questions about my project that this didn’t cover, you can ask me in the comment section of my project.

If you have a project that you would like to see featured here, please let us know!

Tell Us What You Need & Know | Survey Contest

Provincial Maker Faire: Save The Date, May 26th

Brilliant Labs is happy to present our latest Provincial Newsletters!

Tell Us What You Need & Know | Survey Contest

Bio-Making: grow & make your own materials

It Takes a Village, to Make a Community TV Show